Ten years ago, I made an important and life-changing decision: I’ll travel the world – alone. I made this decision because of a deep desire to escape daily routines and expectations. This deep desire was masked by another deep desire which was about exploring and adventures. In the last two posts, I’ve told you a bit about (part of) the events that “provoked” this deep desire(s) in me. Today, I want to dig a little deeper. So… Let’s do this.

Ten years ago, as a university student, I was a career chaser and CV optimizer. I was someone with a plan from high school to retirement as a computer scientist. I also have to admit that I was a little bit arrogant in that sense. Since I optimized my CV, I somehow looked down on people who didn’t do similar optimization to validate my views. Deep down, however, I admired people for following their dreams rather than optimizing the way I did. Looking back, I also realize that I might have always been an expectation chaser. Little 6-year old Alise wanted to be married in her early 20s, have two children, and have a blue BMW. Older Alise was not so far away from that. She was saving for a BMW, working on a long-term relationship commitment, and deeply wanted to have children after graduation. That sounds pretty good, right? Instead of commenting on what I did, let’s shift a minute (or probably longer) to why I did it. Because it’s the whys that are important here. Little 6-year old Alise wanted exactly wanted to be like her mum, except that the BMW had another color. I mean this was super cute back then and is kind of typical for children. Later on, I had my own ideas and have always been supported by my parents, but where did these ideas come from?

As a teenager, I’ve been asked countless times “what do you want to be when you grow up?” We even had a class in school that was supposed to help with that. In one of the classes, we took a test that was supposed to give us some direction. Mine said: teacher, medical doctor, or building material inspector specializing in mortar and concrete. The last one was oddly specific and couldn’t be any further away from the job I’m working today. I interned in a chemistry lab because I was a straight-A student in chemistry and loved conducting experiments. After an experiment by my class with butanoic acid -the stuff that smells like rotten eggs- the school introduced a ban on such experiments. I’m still a little proud of that. Interning in a chemistry lab is awesome. My friend and I did some really funny stuff with dry ice that shocked our supervisor[1]We took all container-like items from her lab, filled it with some kind of fluid and a piece of dry ice.. Studying chemistry would have been awesome too but the job of a chemist seemed more like a never-ending loop of preparing stuff for a machine and waiting for the machine to print something, plus you kind of need a PhD if you want a career and I didn’t feel smart enough to do that. That’s even more silly because last year I got a PhD in computer science. So, I thought let’s do something with a future, where you can earn a big salary. Since I started web programming at the age of 15, I chose computer science. There were several subjects that I personally would have preferred like psychology but I felt I’m not good enough for that.

I’ve to admit already in my childhood, I started feeling a little “off”. I can’t really describe why, but things seemed to be more difficult for me compared to others. Since the human brain is wired for comparison[2]Early research in the 50s already showed that: https://doi.org/10/bg7388, I compared myself to others and thought “I’m the strange one.” The only way to escape that was floating with the current. That meant planning for a career and studying something with a great future. Two weeks after graduating from high school, I was enrolled in a Computer Science program. How that went was part of another post. So, there I was in my last semester which was a little longer than planned because of the accident. I was working on my bachelor thesis and my plan to travel the world. I felt the urge to tell all my friends and family about my plans.

One day I sat down in my tiny apartment with a pile of sticky notes. During this brainstorming session, I wrote down all my dream destinations. Next, I organized the sticky notes in a logical order into a possible route. That was kind of messy and extremely difficult to realize. I had all kinds of countries, cities, and ideas: Cambodia (Angkor Wat), Vietnam, Japan, Australia, Egypt, crossing the Atlantic by boat, riding the Trans-Siberian, Antarctica, the US, China, Singapore, Kuala Lumpur, New Zealand… I honestly don’t remember the complete list, but maybe you see the pattern here: the way I had tried to perfect my career, the same way I approached my world trip. I wanted to plan and control everything. I thought I’m finally following my deep desire for adventure, that was just a mask for wanting to leave everything behind for while. I was also terrified of the gap in my CV that this trip was about to create. One day I took my pile of sticky notes and went to a travel agency. To this very day, the guy[3]Wolfram, if you ever read this: you are a true hero! Without you, I would have never been able to plan and organize this trip. who worked there is the most amazing travel agent I have had.

He also brought me back to the very basics of organizing such a trip: a budget. That also brings me to the question I get asked most frequently: “How did you finance your world trip?” I was a bit overwhelmed by that, to be honest. I had some savings that I initially wanted to spend on a BMW but if I wanted to buy a BMW from that amount of money it would have to be a very old one. With the help of the travel agent and the constrain to be back before the next summer semester, the length for the trip was set to nine months. We estimated that I would need at least 1000 Euros per month plus some safety budget. From the day I know that number, I drastically changed my daily life and routine:

So, on Feb. 1st, 2012, I had enough money to book a part of my trip from Kaiserslautern to Los Angeles. That included:

I also booked tickets for the Trans-Siberian railway through Mongolia (Moscow-Irkutsk-Ulaan Bator-Beijing) and Visas for these countries from a separate company. Booking the remaining parts was simply too early.

As you can see, I knew months in advance where I was going to be. I didn’t feel comfortable organizing train tickets and other stuff on my own, so I booked many tours. Looking back today I’ve to smile a bit about that because I totally changed and would never create such a detailed plan again. Back then, I needed it as security, now I feel confident organizing such trips on my own but that is something I needed to learn based on experience.

To conclude this monster blog post, I would like to tell you a bit about reactions from others and my last week at “home”. People told me that they find me extremely brave. They said the world is such a dangerous place that I should rethink if I really wanted to do that. Others worried about my money, about my career, about my physical safety. Conversations were full of worrying. I was told so many times that this will end badly – in my mind I kind of made peace with that. It is a bit like I expected something bad will happen to me but I wanted this adventure anyway, I didn’t care about risks. Looking back that was a bit silly and the people who scared me were those that never traveled besides typical vacation destinations. Shortly before my trip, I met with everyone who ever meant something to me. I even contacted one person I hadn’t seen in four years. I wanted to say a “proper” goodbye to them whatever that meant. And… all of a sudden, I wasn’t afraid anymore to talk to people about topics that make me uncomfortable because I had a now or never mindset. I simply didn’t care in a good way. To this day, I’m trying to do the same thing since one can respectfully talk about uncomfortable aspects. My boyfriend and I, for instance, agreed that it is better to break up and see how it goes and that was a good thing. 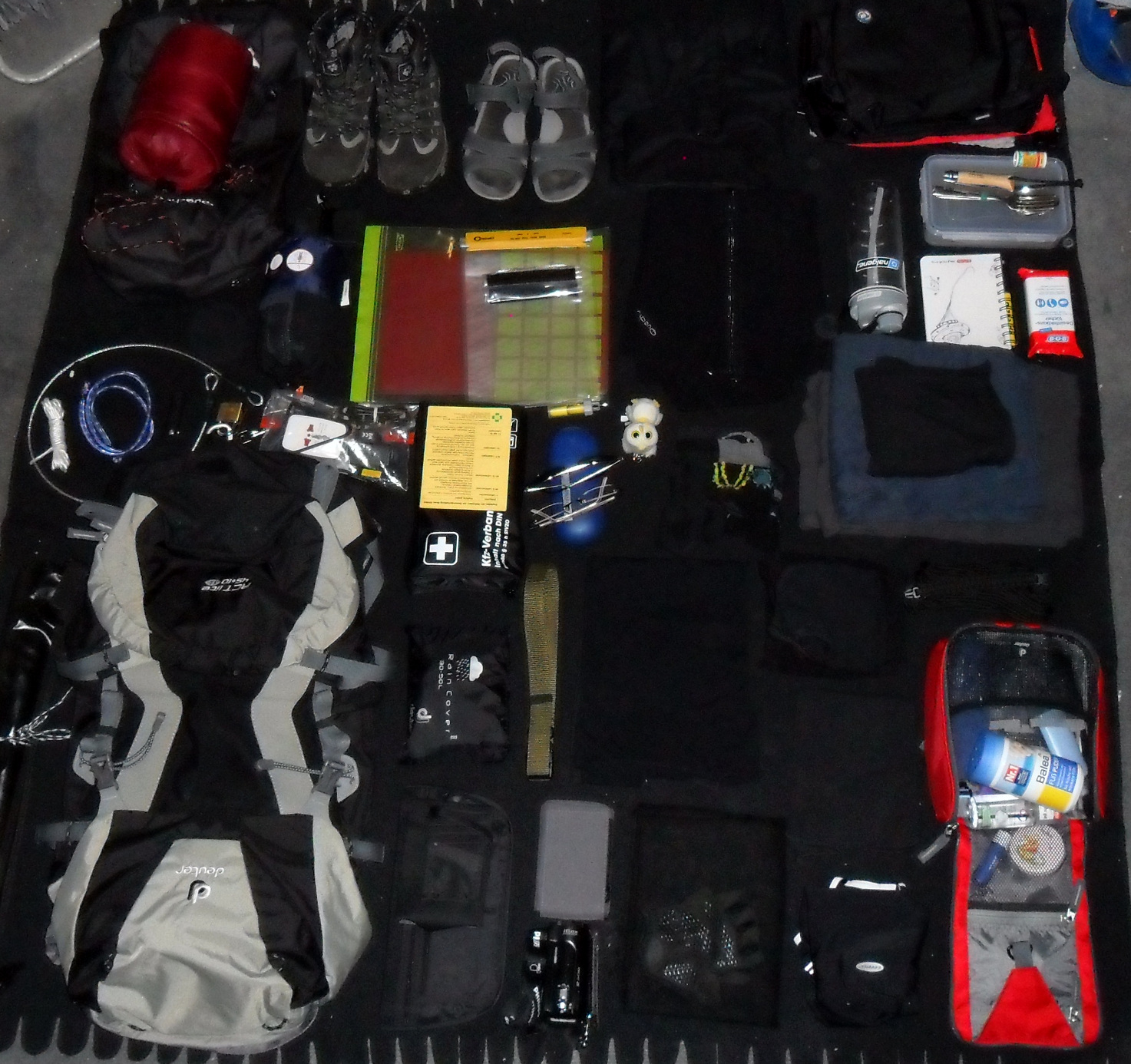 That was the stuff I initially packed for my world trip.

The week before I left was very emotional: I defended my bachelor thesis on a very rainy day and met an important friend. I went to my favorite restaurant for the last time with my friends and ate pizza. The waitress was confused about the number of ice teas we ordered like many times before. The children from the sports club I volunteered in were so cute. 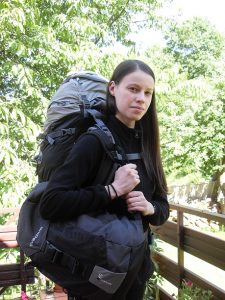 Me on the day I left for my world trip.

I got some presents from them, cute like drawings and we took a lot of pictures together. Back then, these children were a huge part of my life as I watched them growing up, to this day, I sometimes deeply miss them.
I went through my gear over and over again to check everything because I wanted to be prepared. I made sure that I can carry everything I own for several kilometers.

On June 17th 2012, a friend of mine who lived in Bonn at the time picked me up with his car. Before traveling the world, I wanted to explore a bit more of Germany. I said goodbye to my family, took my two backpacks, and off I was. My mum was the sweetest and cried. I looked at her from the car until it was no longer possible.

If you read until here, wow! Thank you so much for your time. Were there any big changes in your life? It doesn’t have to be related to travel. Next time, I’ll write about my final days in Germany and leaving the EU for the very first time. Until then…