A night on a train can be relaxing but also stressful, depending on exactly where you sleep. I’ve put together a few tips and tricks based on my experience on countless overnight trains.

1) Where should I sleep?

Depending on the type of train, there are different sleeping options. The easiest and cheapest, but at the same time most uncomfortable, is sleeping on a seat. I do that if there is no other option. Sitting for a long time without moving is also quite unhealthy because it is difficult for the body to transport fluid (blood, etc.) from the legs upwards if it has no support from the leg muscles. However, if you have to sleep on a seat, I would recommend finding one that has a free neighboring seat, so you can -without shoes- stretch out your legs. Seats with (folding) tables are also more suitable for sleeping because you can rest your head and arms there. 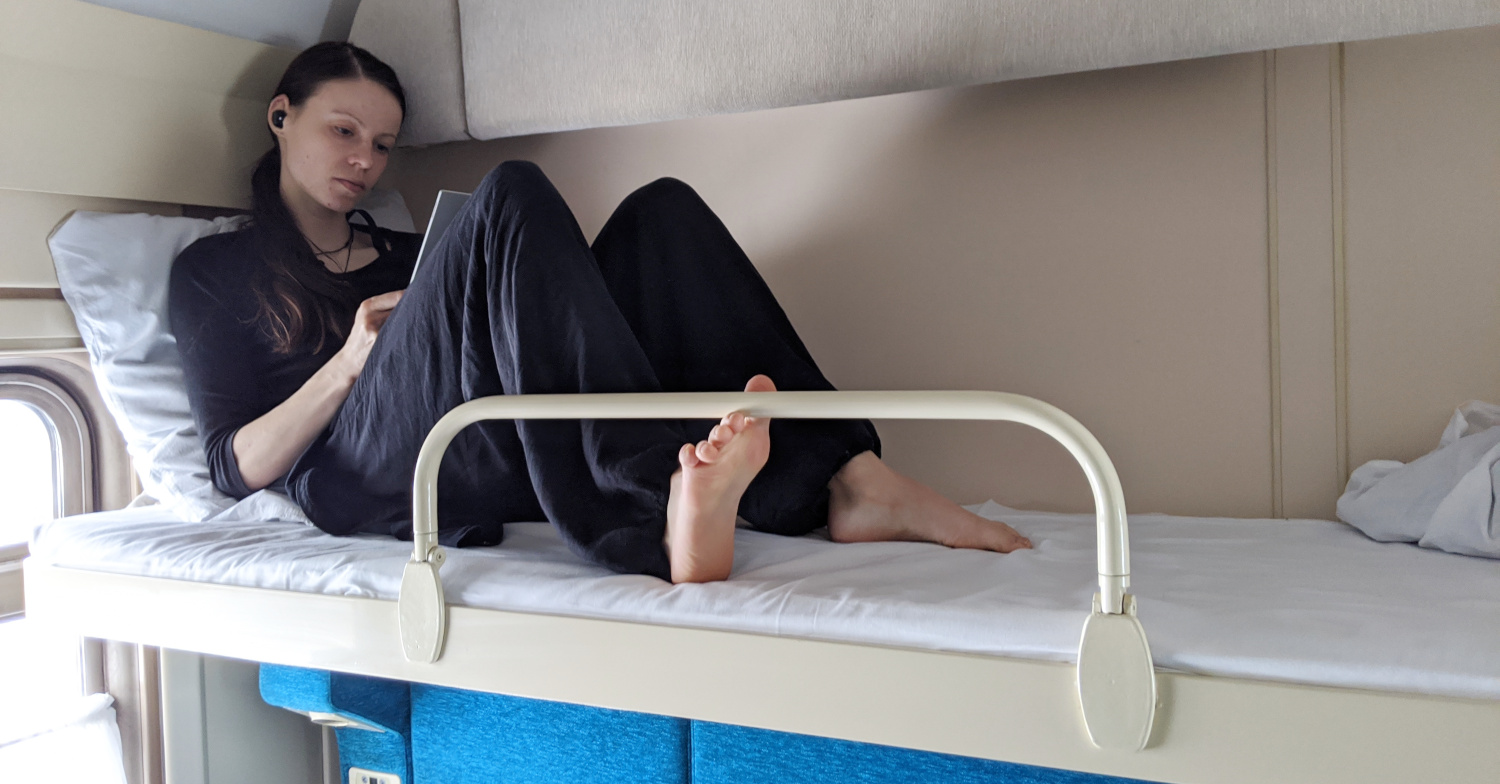 I prefer the upper bed in a 4-person-compartment because there is more privacy.

Much more comfortable are sleeper trains. The most common style are four-person compartments with two lower and two upper beds. The choice of bed depends on whether you expect strangers in the compartment. Personally, I prefer the upper beds, even if that involves a bit of climbing because other passengers often use the two lower beds along with the table. Most of the time, lower beds can be folded to a bench. As a consequence, you might not necessarily be able to lie down or relax on your bed at any time. In the upper bed, however, this is easier. I also find that luggage is often better stowed on top in most train types because it is more difficult to reach for “visitors” from the outside. However, from the upper bed, it is easily accessible because the lower beds store the luggage under the bench. 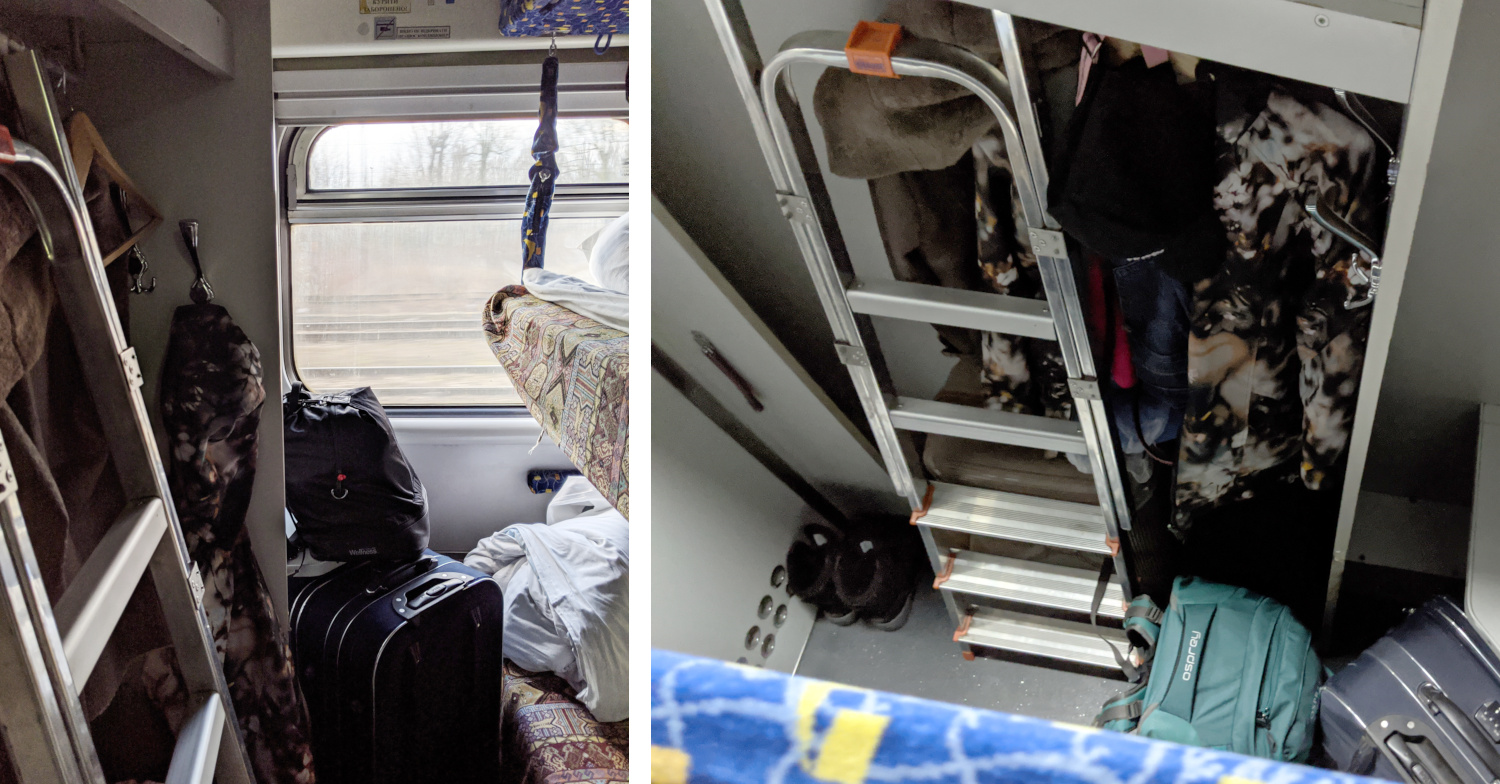 3-person compartments can be really small but are often in trains where you stay only one night.

However, there are many different train models in which the top bed offers extremely little space. In three-person compartments on many routes in Eastern Europe, for example, three beds are arranged above each other. This arrangement is designed for single-night routes, and thus the bench problem does not arise because the train is only used for sleeping. The three beds also mean that you can hardly move in the top bunk. For me (1.60m), this is enough; however, for three-person compartments with three floors, I would rather recommend the lower two beds for space reasons. 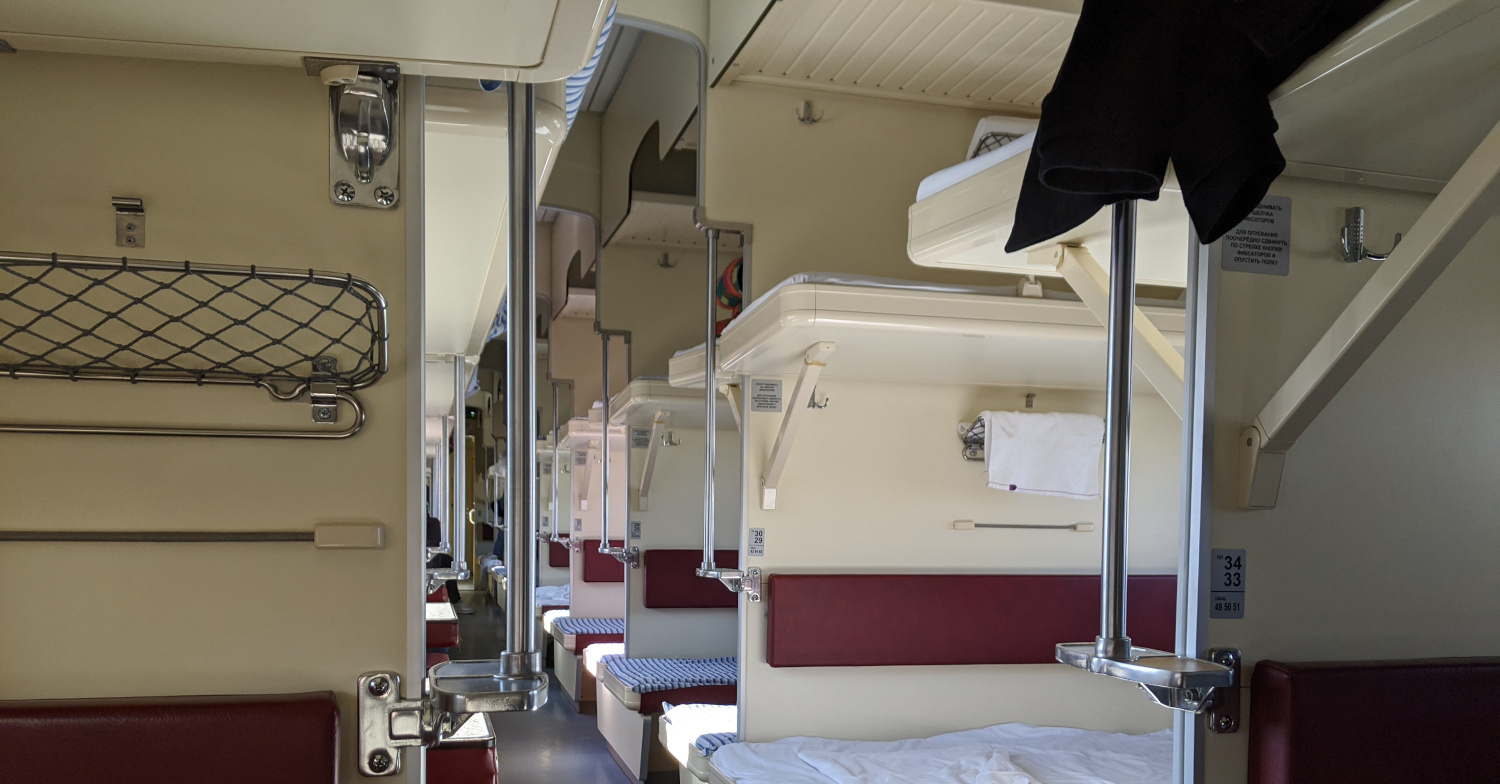 Open compartments host as many people as possible.

The previous tips assumed that you are in a closed compartment. Closed compartments have the advantage that you can close a door at night, making it less likely to be awakened. There are also private enclosed compartments with sinks and toilets. However, many trains also have open compartments, such as the “Platskart” in Russia, which are optimized to provide as many sleeping places as possible. In the open compartment, I would recommend taking a bed orthogonal to the direction of travel, if possible, because you are more protected from passers-by. Additionally, I recommend the upper bed here, even if it offers less space due to better privacy and more personal space. My general opinion on open compartments is split: On the one hand, it is much more difficult to sleep there in peak seasons because there are too many people in too small space, but on the other hand, open compartments are much better ventilated, if occupancy is low. Therefore, I would not advise an open compartment in the summer or the peak season. 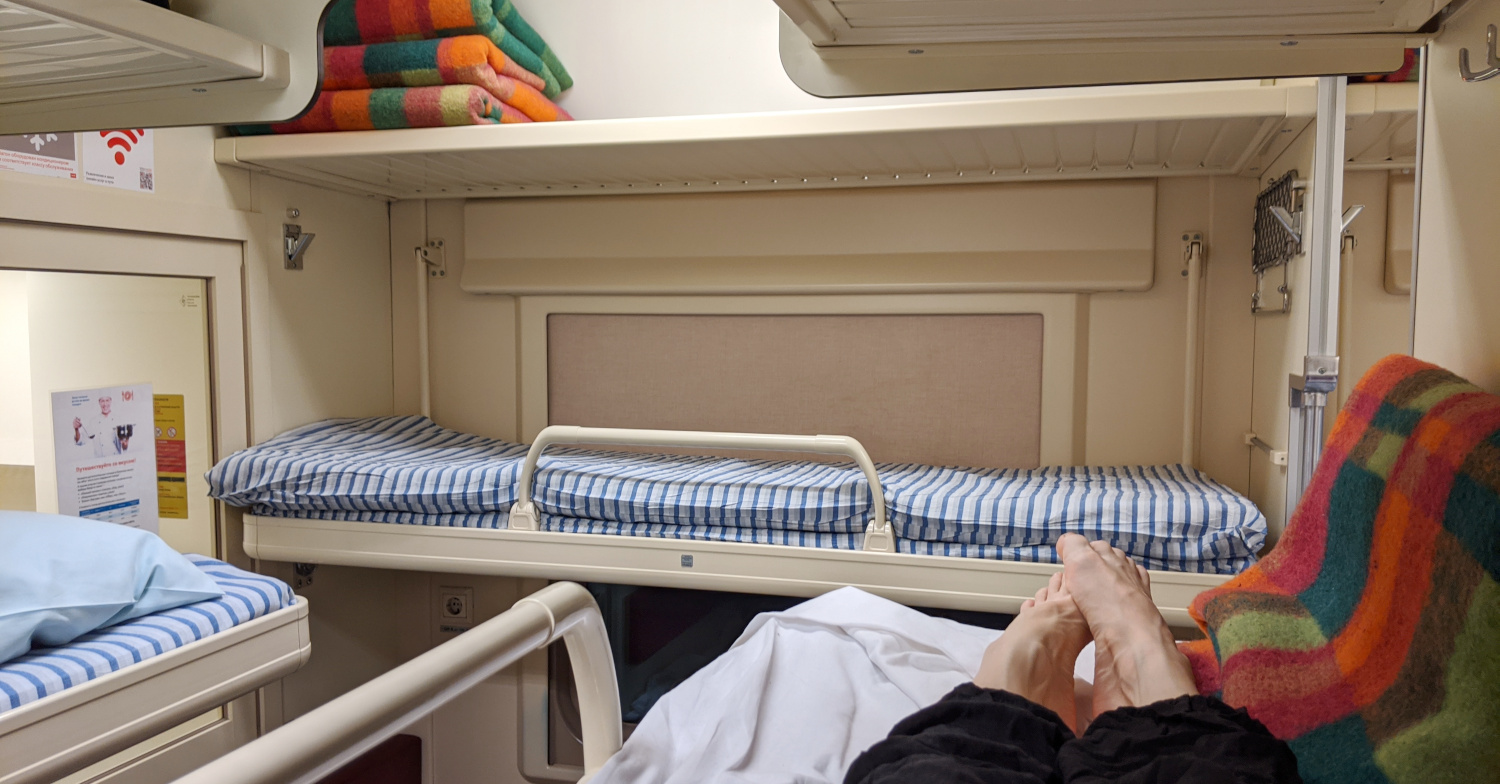 Top view in an open compartment.

Regardless of whether it is an open or closed compartment, I would say that the location of the compartment also matters. I prefer a compartment in the middle of a train car because they are often quieter. Edge compartments are often near doors, water sources, and restrooms. Additionally, I always try to have at least one car between me and the dining car because it is often frequented, and thus many people are heading towards the dining car.

Summarizing, I would prefer an upper bed in the closed compartment in the middle of a train car.

In most cases, trains are equipped with toilet cabins and washbasins. Depending on the train model, you can pay more to have a sink and toilet. In Europe, I have not had any problems with the cleanliness of toilets, although I would recommend always having something handy to disinfect and wipe down. I don’t recommend going to the toilet without disinfectant and wipes, even if it has been clean the last ten times. I would not recommend the water used to wash hands for brushing teeth in most cases because it is not drinking water. Therefore, I would take a water bottle with water to the sink for brushing my teeth. Some trains have a drinking water dispenser, so check in advance if there is one available or if you need to bring water with you. Toilet cabins with sinks should be sufficient for brushing teeth, washing hands, and face, which is enough for one night. However, if you are traveling for several days, there are three options. First, you use a washcloth at the sink. Second, you use a shower if available (often for an extra charge) on the train. Or third, you shower during a stopover. In my experience, showering at a stopover is difficult because hardly any stations are equipped with showers. Showering on the train is also rare, though you can often find out about the train facilities beforehand. I, therefore, shower shortly before the train ride and keep myself clean with a washcloth. 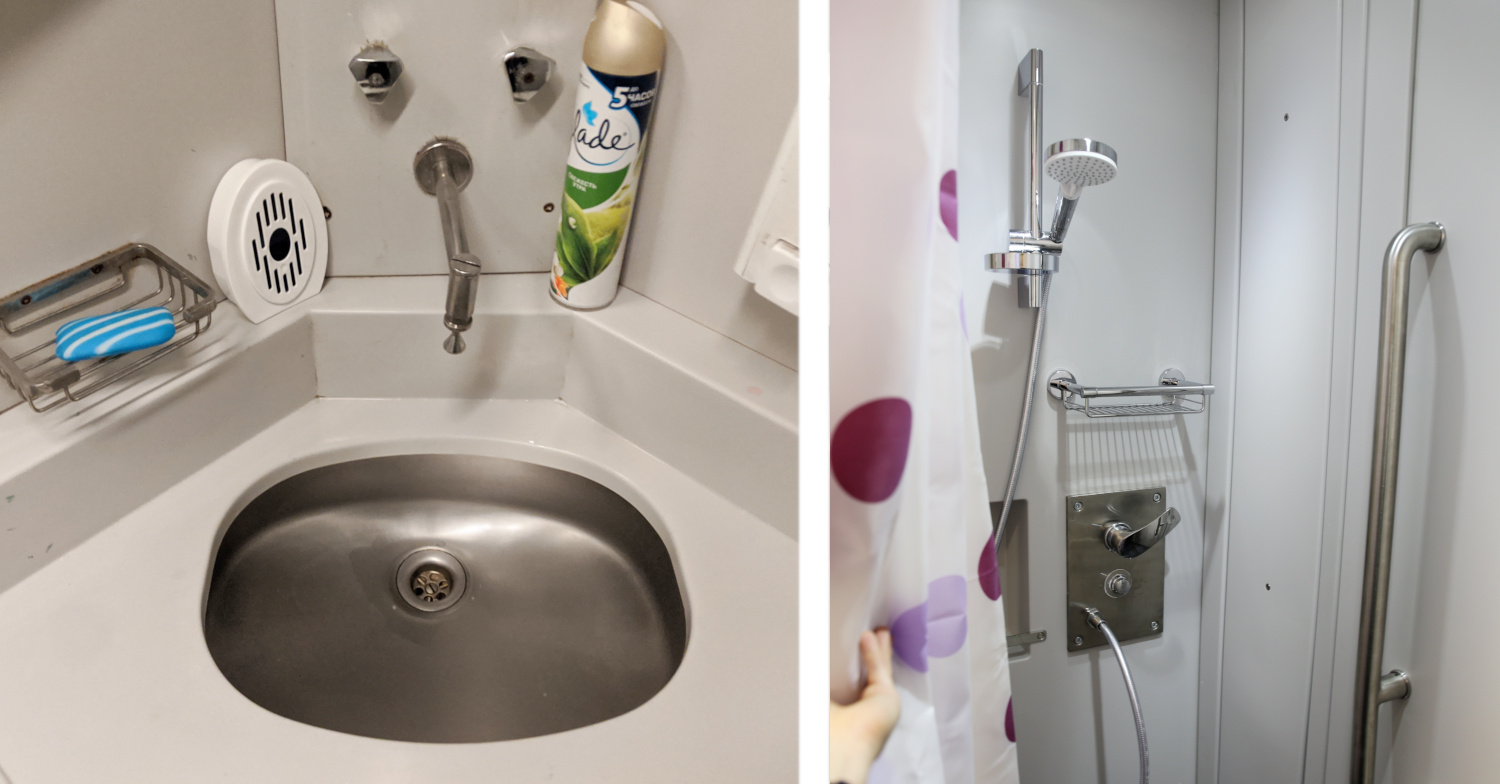 Some trains have showers, but mostly there is only a sink.

In addition to personal hygiene, cleanliness plays a very central role for me in trains. In most trains, fresh bedding is provided, and compartments are cleaned regularly. On the Trans-Siberian Railway, each compartment is vacuumed once a day. However, this is very dependent on the country and train operator, so I would always recommend finding out in advance what is provided by the operator. In the event that there are only blankets and no bedding, you can use, for example, a cotton inlay sleeping bag to avoid having to pack heavy bedding.

For me, the hygiene issue also includes trash. All trains should have easily accessible trash cans that you should use directly. I recommend not using your own garbage bags or collection points in the compartment. Rather, bring the garbage directly out. The way to the trash can is usually a few meters, and on such a trip, it is good to move. Regardless of the garbage, I recommend being neat and not leaving things lying around unnecessarily.

Summary: Before departure, find out about sanitary facilities on the train and whether there is drinking water. If there is no drinking water, pack your own. Take disinfectant and wipes for toileting. If there is no shower, a washcloth will help. Remove trash directly from the compartment, if possible.

Most overnight trains have excellent dining cars that are open throughout. Therefore, in theory, it is not necessary to bring food onboard. However, on the one hand, dining cars are not open all the time, and on the other hand, they do not necessarily offer enough space for all guests. Furthermore, catering by dining car alone can be comparatively expensive, especially when it comes to drinks. Personally, I always check if there is a drinking water dispenser to fill up my reusable bottle. If this is not possible, I pack extra drinking water. If you don’t want to use a dining car or there isn’t one available, there are two other options. 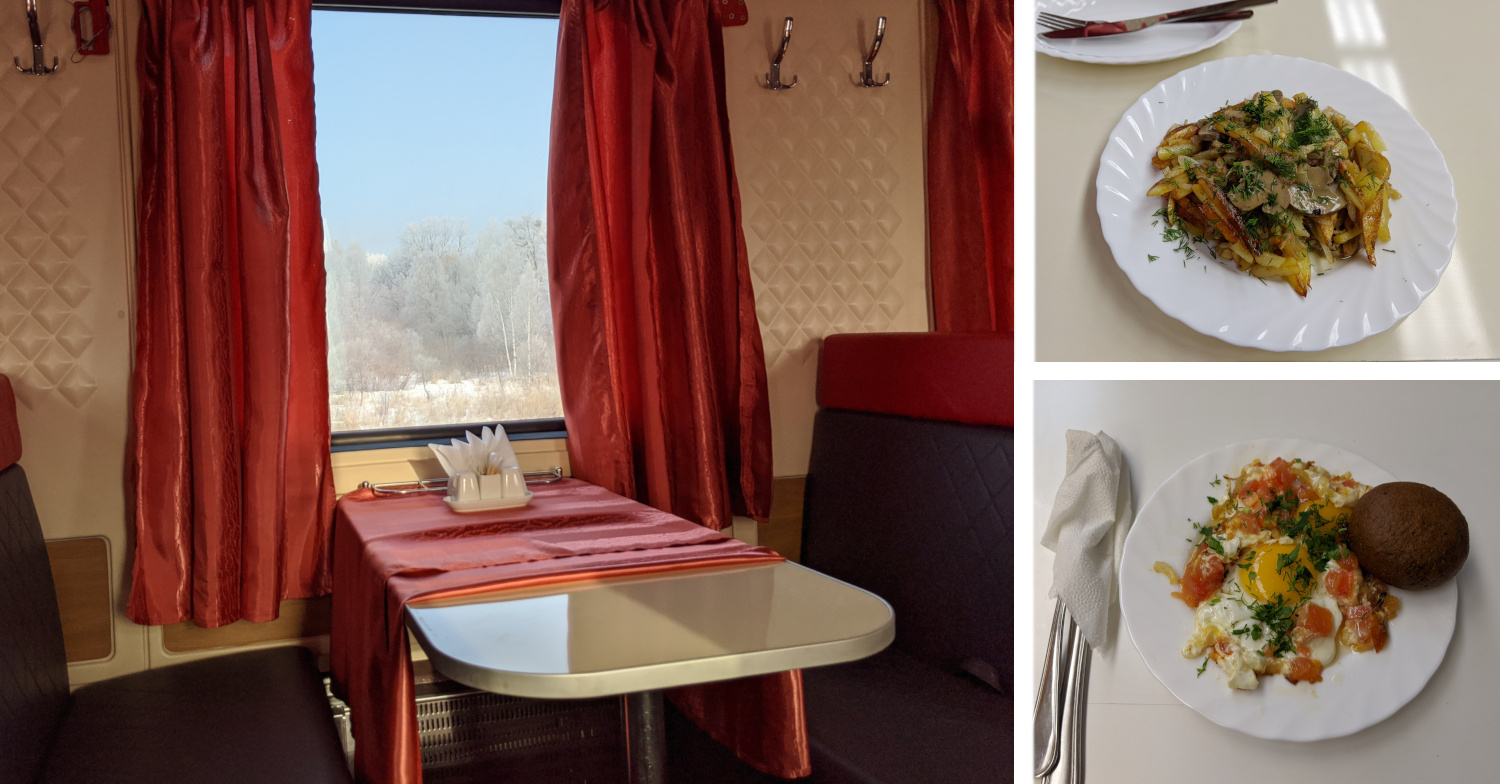 Dining car of the Transsib.

You can buy something on the platform, or you bring supermarket food on the train. Since it is difficult to estimate what will be available in the train stations, I tend to supply myself. For this, I recommend simple food, which ideally requires no further preparation and can be kept dry. For breakfast, for example, I like oatmeal (with milk or water). Bring food that doesn’t require extra tools. In addition to meals, I usually buy something, such as cookies, to share with other travelers. In my experience, dining cars don’t always have the entire menu available, so it’s better to have a backup even if there is a dining car. If the train is only going for only one night, you can also forgo food completely -apart from water- and eat in the station or elsewhere beforehand.

Plan ahead for how you want to eat. Plan a backup in case the dining car is closed or unavailable. However, in an emergency, you can still buy something at the station.

Those were some general tips for overnight train travel. Do you have anything else to add? Then let us know!